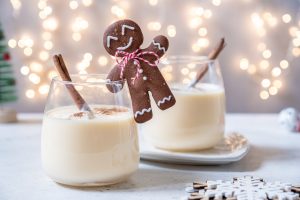 Ask someone if they like eggnog and you’ll probably get strong reaction — they either love it or despise it. And then there’s the people who have never tried it. Since this season is really the only time you may be offered the beverage during the entire year, we thought we’d have a little fun and share some fun facts about eggnog and a recipe too. Enjoy (or not)!

The origin of eggnog.

Eggnog can be traced back to posset, “a hot milk-based drink comprised of spices and wine, which became popular as early as the 14th century”.1 If you’re a Shakespeare lover, you may remember Lady MacBeth drugged her guards’s posset outside King Duncan’s chambers.

There’s not a lot of egg in store bought nog.

In fact, the US Food and Drug Administration permits that the drink cannot be made from more than 1% egg yolk.

It once caused a riot at West Point.

In 1826, The Eggnog Riot, a.k.a. The Grog Mutiny, was a Christmas soiree gone wrong at the United States Military Academy at West Point. You see, eggnog was a part of West Point’s Christmastime tradition.2 So when Superintendent Colonel Sylvanus Thayer said there was to be no alcohol on campus, several cadets decided they would uphold tradition and smuggle in liquor. Some cadets got so intoxicated that they damaged school property, swords were drawn, and bullets rang out. Thankfully nobody got hurt. Although a few students did get expelled.

It’s not the healthiest beverage.

If you’re trying to avoid packing on the holiday pounds, you might want to pass on the nog. One glass can have upwards of 400 calories. But then again, it’s the holidays! Everything is good in moderation.

If you want to add a little holiday cheer to your nog, brandy is the most traditional add-in. If you would like to try something different, you can add in a mix of dark rum and Cognac. Some people also stir in bourbon.

George Washington was a fan.

According to Time Magazine, our founding father partook in this holiday delight. He even wrote down his famous recipe. (You may notice he liked all the booze mentioned above and he forgot to note how many eggs — historians figure about a dozen.)

There’s a national day devoted to the stuff.

Ready to make your own?

Whisk the egg yolks and sugar together in a large bowl until light and creamy. Set aside.

Combine cream, milk, nutmeg, and a tiny pinch of salt in a saucepan over medium-high heat. Stir and bring to a simmer.

Slowly add a spoonful at a time of the hot milk to the egg mixture while whisking. (This is called tempering the eggs and will ensure you don’t wind up with scrambled eggnog.)

Once you’ve tempered the eggs, you can slowly add the mixture in bowl the saucepan. Heat on medium. Whisk until it thickens. A safe temperature is 160 degrees F, which you can measure with a thermometer.

Remove from heat and stir in the vanilla or scrapings from inside a vanilla bean. Refrigerate until chilled. It will thicken as it cools.

Serve chilled with toppings such as cinnamon, peppermint candy, chocolate shavings, whipped cream or all of the above. Take a picture, post it, and tag us. Enjoy!

Want to try something a little different? Check out our NOG VLOG short video…

And if you’re more of a hot chocolate lover, check out our holiday post from last year.