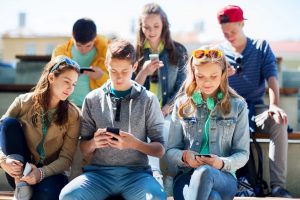 When parents say they fear their teen is addicted to their smartphone, they may be right. According to Common Sense Media, teens spend an average of nine hours a day online. Considering the average teen needs eight to ten hours of sleep per night and spends about seven weekday hours at school, the amount of time they spend interacting with content on their smartphone is staggering. We set out to determine how adolescents are really using their smartphones and whether the effects could be detrimental to their health and intellect—and the results will surprise you. As teachers, these findings may help you determine if you’d like to establish a “no phone policy” in your classroom.

How Teens are Using their Smartphones

According to Digital Marketing Community, among 13-to 17-year-olds:

If teens are spending excessive amounts of time chatting, watching videos, and playing games, how are they not spending their time? They are not reading books for pleasure, playing outside, or exploring the world.

According to Psychology Today, the mere presence of a smartphone may negatively impact brain power. Based on a report from The University of Texas at Austin, cognitive capacity and overall brain power are significantly reduced when a smartphone is within glancing distance—even if it’s turned off and face down. In addition, Smartphones may also have the following adverse effects on teen emotional, intellectual, and physical development:

Additional research related to other smartphone use complications, such as the risk of cyberbullying and texting while driving, have led some parents and educators to question whether U.S. schools should follow in the footsteps of French schools and ban cell phones on school grounds entirely. Whether such steps are ever taken, teachers can help their students regain a solid footing in the real world by inspiring them to extend their learning beyond the classroom. They can also encourage students to keep their phones in their bags in between periods, in the lunchroom, and before and after class. Such encouragement may give students time and space to socialize IRL (that’s cyber-speak for “in real life”). By taking even a momentary pause from their smartphones, teens may just realize that there is a whole world around them that they can explore—no charging cable or headphones required.

One thought on “Are Smartphones Making Our Students Smarter?”